I was a woman on a mission: To make a (semi) traditional Hanukkah dinner.

Why?  I have studied Judaism and am slowly becoming more convinced the Jews just might be right about  a lot of things. I have also forged a friendship with gentleman of the Jewish faith and this has assisted greatly in my quest for my knowledge about Judaism.  I wanted to do something fun and unique for me,  for the first night of Hanukkah this year, which translated to me cooking Latkes and Matzo Ball Soup.

Let me state that finding some of the necessary ingredients and other traditional Hanukkah “accessories” on the first day of the holiday is almost an all day excursion in Chattanooga.  I am quite irritated over the ignorance of sales staff in just about every store and lack of stock in general.  For instance, there is only a small two foot wide section in Walmart in the “Mexican and Asian food” aisle, that isn’t well stocked at all (and I checked three stores). The end cap at Target is even more laughable, and its non- existent except for a few blank gift cards at the local K-Mart. I was determined to find a Menorah as I didn’t place an order for one online in enough time, and the only one I could find (besides the toy one at Target) was a dinky electric one at the second Walmart I checked.

I finally shleped all of the necessary ingredients to the kitchen and tied my apron on ready to get to work. Earlier I had studied a few different recipes and had come to the conclusion as I normally do in the kitchen that I was just going to have to play around and go about the “trial and error method“.

After slaving in a hot kitchen for a couple of hours I was rewarded with the words “it smells like my Mother’s kitchen in here.”  Needless to say I was beaming, and even more so when my attempts were deemed “spectacular”. Latkes are indeed “magical” as I’ve heard, we had a fantastic dinner and devoured more Latkes than we probably should have. The Matzo Ball soup also turned out “delicious” and better than I had hoped. I understood why Jewish Mothers hover so much in the kitchen, as cooking Jewish cuisine isn’t as easy as one might think. I wished I had a Jewish mother in my Rolodex to call and ask questions and such, but I relied on my own culinary experience and a few different internet sources to create a Hanukkah dinner.  From no on no matter what my chosen path I will make Latkes and Matzo Ball Soup at some point in time during the holidays with a bow of respect to my Jewish Heritage.

Made a whirlwind trip to Nashville to work with one of my favorite photographers Oleg Volk. I’m sore as I always am after a Oleg shoot. (you try balancing / crouching / holding a pose in heels for many hours and see how you feel!) There will be more images posted soon.

I was thinking this evening about blessings, I am very blessed in many ways. One of the odd ways I count myself blessed is that I can continue modeling, one of the things I love to do, and I don’t have to be naked or wearing buttfloss to do it. It may not be something that everyone understands, but I’m following my bliss.

I’m also blessed with great photographers who respect my boundaries and are willing to work within them, something that is becoming increasingly rare, as is the photographers professional treatment before/during/after the shoot with the model. It’s a profession, not a “guys club”.

Off my soapbox now. Love the first two shots out of the gate.

You know you are Jewish. Not in practice, but your heritage tells you that you are. You are knowledgeable as to the hell rained down upon what we have all be taught are G-d’s chosen people since the time the Egyptians banished the Jews across the desert  and red sea to what is now Israel.   You studied  about World War II, and amongst the ignorant of today’s world, the Holocaust unable to tear yourself away from the horrors that would unfold in front of your eyes, knowing that you are only here today because of your ancestors survival. You tell yourself in your head that you would have used your wits and outsmarted the Nazis as if that would have eve been possible to do in the first place. That you would have escaped, that you have a Christmas tree, were raised in a Christian school, and sang in the church choir. You would not have been among the six million, that you have never professed your allegiance to Israel. 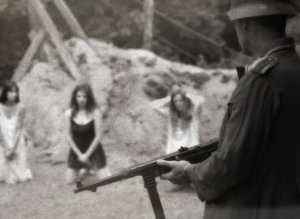